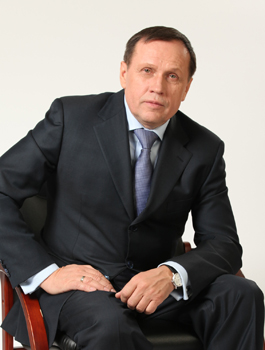 Served in the Russian Army (the organization of military railway transport). In 1999 retired in the rank of Colonel.

Management experience in railway field is over 30 years.

From 2003 to 2007 was appointed First Deputy CEO of New Forwarding Company, OJSC.

In February 2007 was appointed CEO of NFC, OJSC.

In 2006, by the Resolution of the Transport Ministry of the Russian Federation, was awarded a gorget "Honorary Railman" badge for major contribution to the development of railroad transport.

In 2009, by the Resolution of the Transport Ministry of the Russian Federation, was awarded a gorget "In Honour of 200th Anniversary of Waterway and Overland Transport Management" badge for active participation in the process of railway transport reform and improvement of the railroads maintenance management processes.

From 2007 to 2010 was included in the "1000 Most Professional Managers of Russia" list rated by the Kommersant Publishing House and the Association of Russian Managers.

In 2012 was awarded the "CIS Honorable Transport Worker" by the Resolution of the Transport Ministry of the Russian Federation.

After Sergey Maltsev was appointed Senior Vice President of Russian Railways, OJSC who earlier was on position of CEO Globaltrans Group for the last 8 years, Mr. Shpakov was carried out duties of CEO of the Group since November 2015.

In March 2016 was appointed CEO of the Group.

Please use the feedback form below, and one of our managers will be in touch with you.